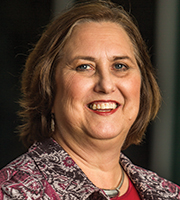 Quick Bio: Carlita Slatky holds a degree in Political Science from Berry College. She has worked in the Chatham County Public Library System and spent time working in student recruitment, but her combined love for books and retail eventually led to her current role as Director of the University Store at Georgia Southern University. She has previously served as the manager of the bookstore at Armstrong State University heading the design efforts and move to a larger on-campus facility increasing the number of book offerings as well as retail floor space. Similarly, during her tenure as Director of the University Store at Georgia Southern, she has expanded apparel and merchandise offerings, led efforts to control student textbook costs by offering eBook options and opened a stadium unit of the University Store at Paulson Stadium’s north side entrance.