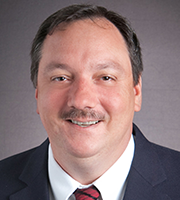 Quick Bio: Gregory (Greg) Surrette Sr. enlisted in the U.S. Army in 1984. Surrette served as a heavy wheel vehicle recovery specialist, mechanic and motor pool maintenance supervisor for the Army for several years and is a veteran of the Gulf War. After separating from the Army, Surrette co-operated several businesses including a general contracting business, a package shop, and a Chinese take-out restaurant before earning his Bachelor of Information Technology degree from Armstrong Atlantic State University in 2004. He began working at (former) Armstrong State University in 1999, first in technology positions and later moving into Card Services and Auxiliary Services in 2008. He currently works as the associate director of Georgia Southern Auxiliary Services, and his primary focus is acting as the liaison for the division on the Armstrong Campus.