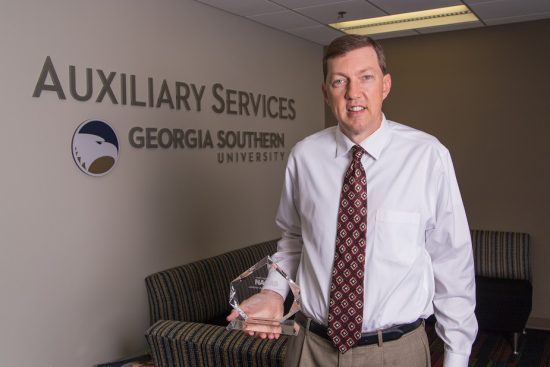 With more than 23 years of experience in Auxiliary Services, Mills has dedicated much of his career to improving the field and the institutions with which he has been involved. Starting his career in Athletics at Florida International University (FIU) after college, the Georgia Southern alumnus was eager to grow professionally.

Felecia Townsend, then FIU Auxiliary Services Coordinator, took Mills under her wing and suggested he take a job at the campus print shop. He followed her guidance and obtained new skills in finance and management. He also attended his first NACAS conference in 1997.

Right away, Mills was inspired by the welcoming group of people he met.

“Everyone was so friendly and willing to share their knowledge as well as their problems they were working through,” said Mills. “I fit right in, and I really enjoyed it.”

Mills jumped right into the organization, taking on coordinator roles and chair positions. He volunteered for years both during his time at FIU and later at Florida State University, serving as the NACAS South secretary, vice president elect, president, past president and host conference chair, among other positions.

Since coming to Georgia Southern in 2010, Mills has also become involved in leadership roles with the Southern Association of College and University Business Officers Board of Directors, the NACAS Foundation and NACAS National. He also served as a faculty member for the University of Kentucky’s College Business Management Institute and received the Certified Auxiliary Services Professional distinction in 2011.

“My favorite part of being in the organization is creating relationships with colleagues and business partners,” he said. “It’s so beneficial to have the opportunity to create this network of professionals. I’m grateful to work in such a diverse field with different perspectives.”

Georgia Southern Auxiliary Services Executive Director for Administration Jeff Blythe nominated Mills for the award earlier this year. Having worked with Mills for nearly a decade, Blythe was eager to nominate someone he felt was so deserving.

“Eddie is the epitome of a leader,” said Blythe. “He cares about people. He cares about his staff, and he genuinely wants the best experience for the students at Georgia Southern.”

“From my personal interactions with Eddie through NACAS and NACAS South, I know that he is a role model for people in Auxiliary Services,” he said. “He is highly respected throughout the industry. People either know Eddie, have a story about him, served on a committee or board with him or have been taught or mentored by him.”

Though he has impacted many, it was Mills who was most humbled by the recognition. 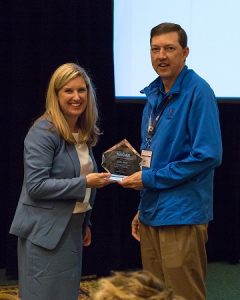 “It was honestly such a surprise,” he said. “I heard the description of the winner being read, and it wasn’t until nearly the end that I realized they were even talking about me. I’m so appreciative. Awards like this are so meaningful because they come from your peers. The fact that they see value in what you’ve done is pretty special.”

The Lifetime Achievement Award is given annually to an individual who has excelled in the field of auxiliary services. The recipient should be a role model for aspiring auxiliary services professionals, and the recipient’s action must have benefitted both their institution and higher education. All nominees should have an extensive list of professional achievements, strong management skills and a history of providing leadership to their institution and profession.

“We are so proud of Eddie and his accomplishments,” said Townsend. “The award is well deserved.”